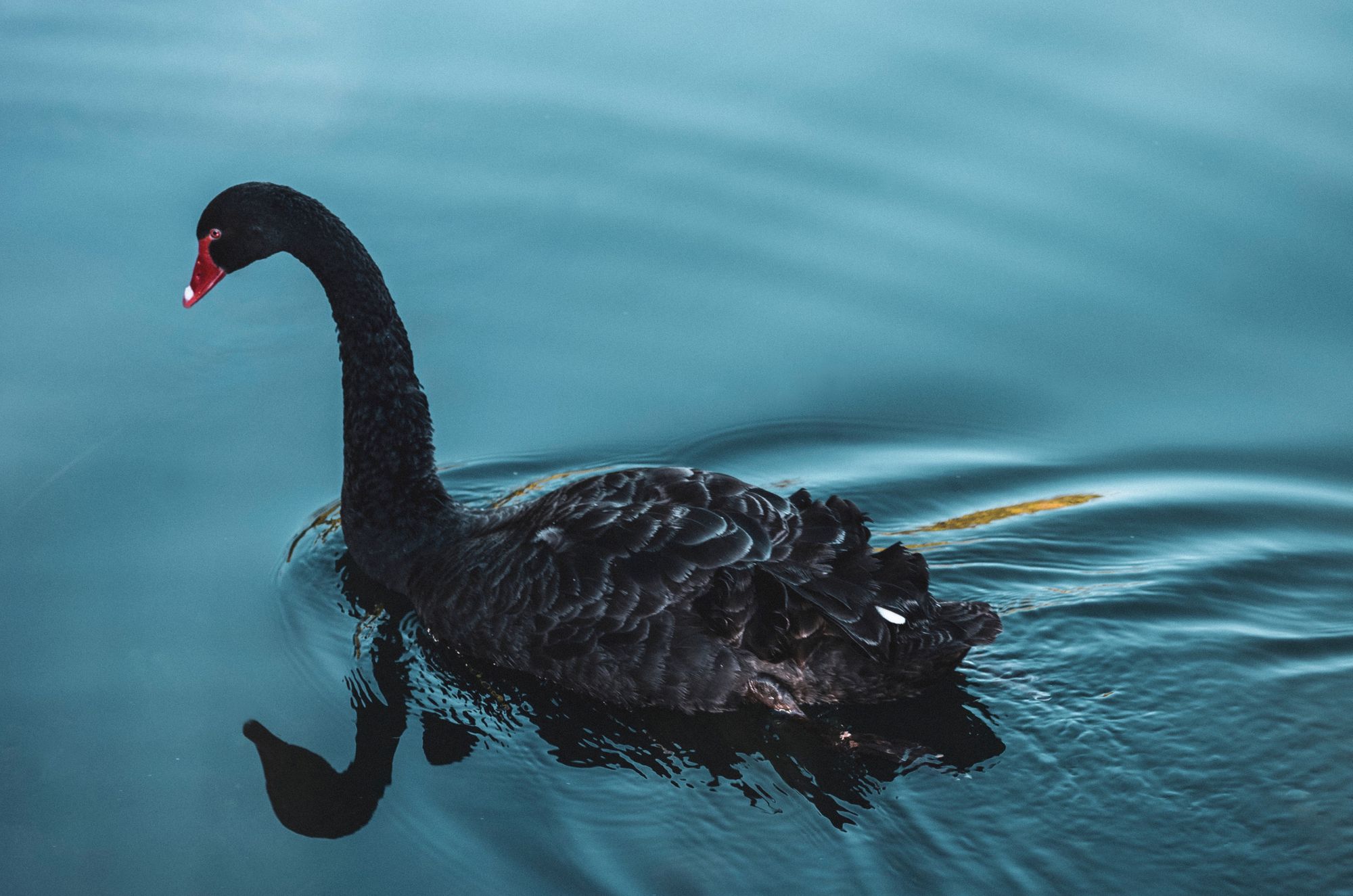 The improbabilities of a sudden, extreme loss and their significance

The mind is not designed to grasp the laws of probability, even though the laws rule the universe.
- Steven Pinker, How the Mind Works

In sixteenth century London, the term “black swan,” which traces its origin to the ancient Latin phrase “rara avis in terris nigroque simillima cygno” (“a bird as rare upon the earth as a black swan”), became a shorthand way to refer to what was considered an impossibility. Up until then, all historical records of swans had indicated that they were always white, leading to the presumption that swans of any other color were nonexistent. Roughly a hundred years later, however, black swans were spotted in Western Australia and what was once deemed unimaginable was now true, shattering an entire system of thought.

Since then, “black swan” has continued to persist in our modern vernacular as a metaphor for an event that exhibits three attributes:

Why has this been on my mind?

A couple weeks ago, the National Center for Health Statistics, in conjunction with the Centers for Disease Control and Prevention, published its latest report on “Maternal mortality in the United States” for 2018, the year Linda died. In 2018, there were 658 maternal deaths out of 3.79 million births, equivalent to approximately 17.4 deaths for every 100,000 births, which translates to a percentage of .017%. Of that total, obstetric embolisms were identified as the cause in 6.5% of deaths, equivalent to approximately 1.1 deaths per 100,000 births, or a percentage of 0.0011%.

When you lose someone close to you, especially the person closest to you, you inevitably think about the circumstances of that loss. In the backs of our minds, the latent thought exists that we could lose someone in a car crash (odds of 1 in 103), to cancer (1 in 7), from a crime (1 in 285), due to choking on food (1 in 2,696), or even because of a cataclysmic storm (1 in 31,394). But you do not imagine it possible that you could lose your wife, on what was supposed to one of the most joyful days of your life, due to a medical complication called an amniotic fluid embolism simply because you never even knew there was such a thing (which itself is not well understood) in this world. You also did not ever stop to think that there was actually a chance of maternal death, however small; it is the sort of tragedy that you dismiss as being relevant to society a hundred years ago but not in this day and age. The possibility of losing a child may have briefly flashed in your mind, perhaps, but not necessarily the mother of your child.

When loss occurs due to an event that exists outside your universe of known possibilities, your mind revisits the question “why?” over and over and forces you to question, somewhat fearfully, whether you can really put stock in what you believe to be true. This is one of the difficulties of processing a “black swan” loss. Grief is already an isolating journey, shaped by the uniqueness of one’s own process and experience. A uniqueness in the circumstances that caused one’s loss only amplifies that loneliness.

On one level, how Linda died still matters very much to me, so much so that from time to time I read research studies on amniotic fluid embolisms and reports, like the one referenced above, on maternal mortality. Every instance when a friend or coworker or family member gets pregnant and has a baby (and when you are in your mid-thirties, this happens frequently) is a trigger that prompts me to remember what happened - not in a way that overwhelms, rather in the sense that I cannot help but pause and wonder why it all went wrong for Linda and me. And yet, on another level, what happened two years ago has had little bearing on all that has been required to find a way forward since. Linda is not here - whether it was a childbirth complication or instead had been one of any number of more common causes that resulted in her death and my younger daughter’s disability, it is hard to see how anything in the past two years would have significantly changed.

These two competing thought-streams, one being that the circumstances of Linda’s passing matter significantly, and the other being that the circumstances themselves are less important, coexist within my mind. The latter has, at times, led me to question whether my situation is really as uncommon as it seems. A couple months ago, I learned that one of my classmates from business school too lost his wife due to childbirth. A friend I met last year is a widow about my age whose husband was randomly, fatally shot while camping in a tent with their two young daughters, an event that was unfathomable, and in her words, “a million percent random,” until it happened. These stories make you realize that in life there are tragic lotteries you wish you never had to know about, and you wonder how many others drew short straws.

“Rounds to zero” out of 88.6 million families in the country. That does not account for the odds that underlie the circumstances of how I came to be in this situation, which I pointed out above (1.1 in 100,000), nor having a child with a disability.

The prevalence of cerebral palsy (my younger daughter’s disorder) is estimated at roughly 2 in every 1,000 children, with less than 10% of those cases being attributed to disruption of the child’s oxygen supply at birth, otherwise known as birth hypoxia. That translates to less than 2 out of every 10,000, or 0.02%.

I am not a statistician, and one may point out that my reasoning is flawed, but from this data I have drawn the conclusion that my tribe is extremely small and that there must be only a handful of people, at most, with a current life situation such as mine. Of course, any person can always point to any number of arbitrary dimensions of their life to the point of uniqueness.

Again, what to make of these numbers? Do they actually matter? They do not impact my everyday life; whether few or many people know what it is like to face such a severe scenario would not change what I do. But it still feels as if they carry significance, if anything because grief is made harder by having to find the mental and emotional capacity to understand events that were once impossibilities.

Amidst all of this, I also often reflect on what was once another impossibility - my younger daughter’s miraculous survival. There are no statistics to ponder, no data to decipher...there is only the reminder that sometimes life itself, the mere presence of a person, is a “black swan” of the most extraordinary kind. That can be enough for hope to always endure.